Conflict on the Nile

The sources of the Nile remained a mystery for thousands of years. The Ancient Egyptians regarded the river as holy and as their lifeline. The British colonialist empire regarded finding the source of the Nile as crucial for their power over Africa. The first European seeing the waterfall where Lake Victoria falls into the White Nile at Ripon Falls at Jinja in Uganda, was the English explorer  John Speke in 1862. 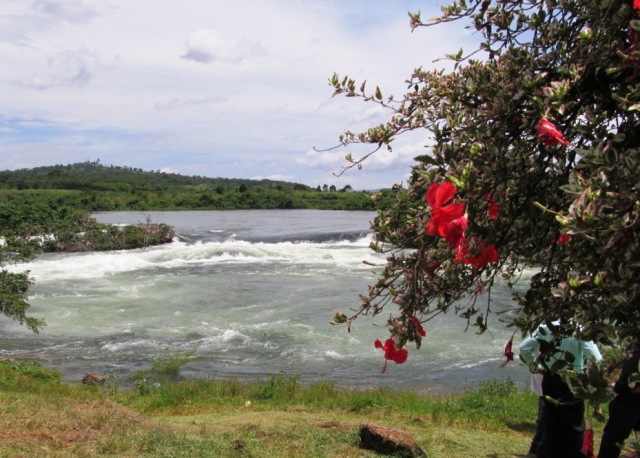 There are several other sources of the White Nile, but Lake Victoria is probably the most spectacular.

Countries that are associated to the Lake Victoria catchment area are Uganda, Rwanda, Burundi, Congo, Tanzania and Kenya.  With growing populations, these countries all have increasing interests in exploiting these enormous water resources for themselves.

The White Nile is an impressive and powerful river. The waterfalls are spectacular. See a short video here with a person swimming through the white waters at the Itanda falls

(Also available on Youtube. Video made by Sven Åke Bjørke)

Here is a video from Murchinson falls further north in Uganda.

The Nile – the world’s longest river – runs over 6800 kilometres from Uganda to the Nile delta, situated between  the mediterranean cities of Alexandria and Port Said.

The Nile has two major tributaries, the White Nile and the Blue Nile. The White Nile is the longest, and the most remote source of it is still discussed, but is probably situated in either Rwanda or Burundi. The Blue Nile is the bigger tributary of the two, bringing almost 80 % of the total water of the river Nile. Eleven countries claim to have rights to either the sources of the Nile or to the water of the river itself.

The river flows at an almost constant rate at Mongalla, South Sudan. After Mongalla, the river enters the enormous swamps of the Sudd region of South Sudan. More than half of the Nile’s water is lost in this swamp to evaporation and transpiration.

The Blue Nile begins at Lake Tana in Ethiopia. The White and the Blue Nile join each other at the Sudanese capital of Khartoum.

The northern section of the river flows northwards almost entirely through the Sudanese desert to Egypt then ends in a large delta that empties into the Mediterranean Sea. Most of the population  of Egypt live along the Nile valley north of Aswan, and almost all cultural and historical sites of Ancient Egypt are situated along the Nile.

(This map is a creative commons license.)

In Egypt the Nile supports much of the population, enabling Egyptians to live in otherwise uninhabitable regions of the dry, dusty and warm Sahara desert. The river’s otherwise navigable flow is interrupted by the Cataracts of the Nile; sections of rapids and currents with islands, shallow water, and rocks.

There is much water in the Nile – but is there enough to cover every need in all the affected countries?

“Ethiopia is killing us,” taxi driver Ahmed Hossam said, as he picked his way through Cairo’s notoriously traffic-clogged streets. “If they build this dam, there will be no Nile. If there’s no Nile, then there’s no Egypt.”

There are already several dams in the Nile, but so far these dams do not have much impact on the water flow.

There is no doubt, Egypt will be in serious problems if the Nile actually sinks.  And it is not only Ethiopia with  its new Renaissance Dam threatening the water flow of the Nile. The African countries around Lake Victoria also make their claims. East Africa seeks more Nile water from Egypt. Egypt considers such claims as a declaration of war.

“The countries recognise that, without co-operation, if you add climate change and growing populations the future is a very unpredictable, risky one,” says World Bank senior water adviser David Grey  (BBC 2009)

Egypt and Ethiopia have tried their best to defuse the potential armed conflict, and with some success so far. Still, intense negotiations remain.

The negotiations to some extent are based on the Nile water treaty of 1929, in which Egypt and Sudan were given rights to a stipulated amount of water and  safeguard Egypt’s historic rights by giving Egypt full reservations on any agreement concerning the flow of the water.

The East African countries do not accept old  agreements made by the colonial rulers in the Nile countries. Kenya reneges on Nile Treaty while Tanzania  ignores the Nile water treaty. 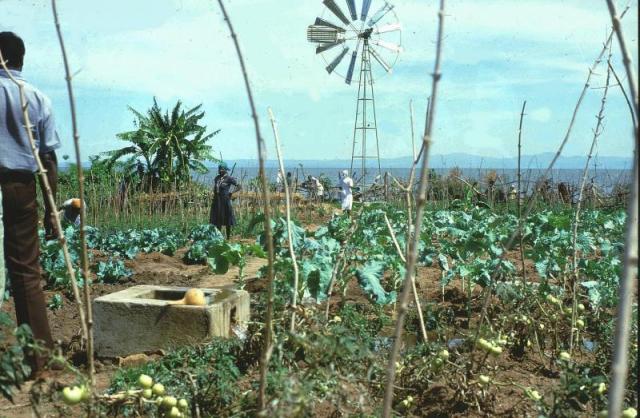 The growing populations of East Africa need water for growing their crops. With the ongoing climate change, the weather becomes increasingly erratic. The rainy seasons and the monsoon have as a rule been very regular and predictable for a thousand years. This is no longer the case. The ordinary rainy season may remain dry, while the dry season brings rain. Rather than some rain every day, it might come for some days, and then it is dry for weeks. To secure a more regular water supply, the need for more irrigation is clear.

Agriculture eats up over 80 percent of Egypt’s total water resources. “If it weren’t for Egypt’s food imports, this figure would be much higher. Wheat production requires, on average, 1.6 cubic meters of water per kilogram, which means that the 11.5 million tonnes of wheat Egypt imported in fiscal year 2011/12 was equivalent to 18.4 million cubic meters of water, almost a quarter of Egypt’s total water supply that year.

However, this trade in so-called virtual water comes at a cost. Shipping in food from around the world adds to Egypt’s carbon footprint, leaves it reliant on other countries to meet its population’s caloric needs and puts a strain on scarce foreign reserves” ( Ministry of water resources and irrigation, Cairo, 2013). 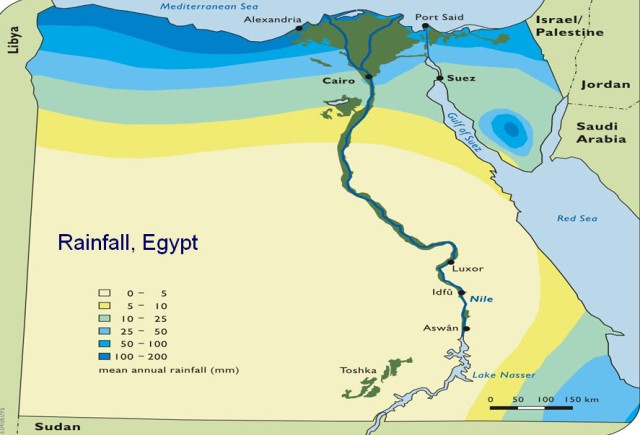 Egypt obviously is completely dependent on the water from the Nile.  Agriculture is extremely difficult in Sahara.  The rich and fertile Nile delta feeds the 85 million population of Egypt. With a sinking Nile and rising sea levels due to global warming, the situation can become precarious. 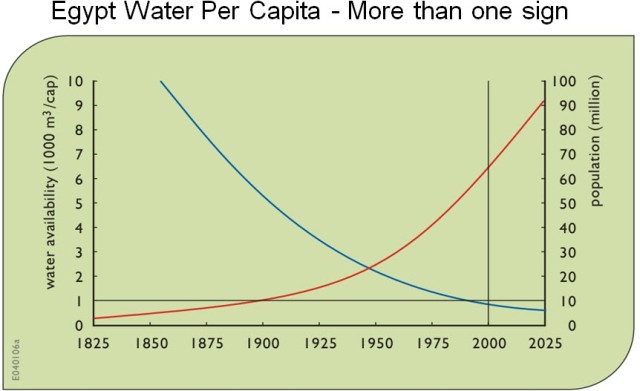 “According to a report by state statistics agency CAPMAS, water resources per capita stood at an ample 2,526 square meters per year in 1947, dropping to 1,672 cubic meters in 1970 and 663 cubic meters in 2013. The agency predicts that by 2025, the annual quota will dwindle to 582 cubic meters per person.

The United Nations sets a baseline figure of 1,000 cubic meters of water per person per year. When a country dips below that line, it is considered water poor, with insufficient resources to provide water for drinking, agriculture and nutrition for its inhabitants.

Countries with below 500 cubic meters per person per year are considered to be in a state of absolute water scarcity.”

With global warming and climate change combined with rapidly increasing populations, the freshwater situation in the region is likely to deteriorate.

This diagram shows the impact of expected population growth on water usage by 2025, based on the UN mid-range population projection. It uses the current rate of water use per person without taking into account possible increases in water use due to economic growth or improvements in water use efficiency. The regions most vulnerable to domestic water shortages include those where access to water is already limited, the population is growing rapidly, urban centers are spreading, and the economy is burdened by financial problems and a lack of skilled workers.

The impacts of climate change – including changes in temperature, precipitation and sea levels – are expected to have varying consequences for the availability of freshwater around the world. For example, changes in river runoff will affect the yields of rivers and reservoirs and the recharging of groundwater supplies. An increase in the rate of evaporation will also affect water supplies and contribute to the salinisation of irrigated agricultural lands. Rising sea levels may result in saline intrusion in coastal aquifers. The fertile Nile delta in Egypt is particularly vulnerable to the impacts of climate change and a sinking water level in the Nile.

The Nile Delta is one of the oldest intensely cultivated areas on earth. It is very heavily populated, with population densities up to 1600 inhabitants per square kilometer. The low lying, fertile floodplains are surrounded by deserts. Only 2,5% of Egypt’s land area, the Nile delta and the Nile valley, is suitable for intensive agriculture. Most of a 50 km wide land strip along the coast is less than 2 m above sea-level and is protected from flooding by a 1 to 10 km wide coastal sand belt only, shaped by discharge of the Rosetta and Damietta branches of the Nile. Erosion of the protective sand belt is a serious problem and has accelerated since the construction of the Aswan dam

Rising sea level would destroy weak parts of the sand belt, which is essential for the protection of lagoons and the low-lying reclaimed lands. The impacts would be very serious: One third of Egypt’s fish catches are made in the lagoons. Sea level rise would change the water quality and affect most fresh water fish. Valuable agricultural land would be innundated. Vital, low-lying installations in Alexandria and Port Said would be threatened. Recreational tourism beach facilities would be endangered and essential groundwater would be salinated. Dykes and protective measurements would probably prevent the worst flooding up to a 50 cm sea level rise. However, it would cause serious groundwater salination and the impact of increasing wave action would be serious.

Going to war over the management of the Nile water would most likely not lead to any sustainable solutions. Cooperation would be a wiser path to follow.  “By coming together to jointly manage their shared water resources, countries build trust and prevent conflict. In the face of potential conflict and regional instability, the Nile basin countries continue to seek cooperative solutions.  Kameri-Mbote, P. (2007) Water, conflict and cooperation: lessons from the Nile river basin

In Egypt, A Rising Sea — And Growing Worries About Climate Change’s Effects (Aug 2017)

Conflict on the Nile: The future of transboundary water disputes over the world’s longest river (Future directions in. 2013)

Rehman, A.M. (2011). The Geopolitics of Water in the Nile River Basin. Global Research: Centre for Research on Globalisation

‘The Rising Pressure of Global Water Shortages’ Hydrodiplomacy to the Rescue?

World Bank (2007) Assessing the Economic Impacts of Climate Change on Agriculture in Egypt : A Ricardian Approach

Water Security in the Arab World

University Teacher.
View all posts by svenaake →
This entry was posted in Environment, Sustainable development and tagged Lake Victoria and the White Nile, The Nile basin, The Nile conflict, The Nile water Treaty of 1929, The White Nile, Water and conflict, Water wars. Bookmark the permalink.

3 Responses to Conflict on the Nile