What happens now, is no climate variation, it is a real climate change.  The solar forcing – the insolation – has not increased the last forty years. There is no special warming Milankovich effect like we had in the Holocen optimum some 5000-8000 years ago; there are no big non-eruptive volcanoes pumping greenhouse gases into the air. There is no other explanation for the present global warming than human activity. We can already observe how the Earth’s climate and with it the world’s ecosystems are changing at an accelerating pace.

Wouldn’t it be nice if all this manmade climate change eventually turns out to be just a natural variation? Climate has always varied, hasn’t it?

See an animation of the varying climate: Multimedia – climate of the Earth
(In Norwegian, but you can probably figure it out anyway.)

You will find plenty of graphics on this website: Global warming art   |  Gallery of temperature change data

Yes, no doubt, we all agree: climate has been varying like a roller coaster. The IPCC even has a separate chapter on the climate in previous times called Paleoclimatology

So if we all agree, why can’t we just relax, then?

The problem is: we do have a fairly good idea why climate changed in previous times.  Climate as a rule changed due to changes in insolation – solar forcing-  or due to redistribution of heat by changes in ocean currents. The sun could change in intensity, like the “Little ice age”. During this period there was very little sunspot activity, and less energy from the sun arrived on our planet. At other times the Earth’s orbit around the sun could vary, increasing or decreasing the distance between our planet and the sun. At other times the orbit could be more elliptical, or the polar axis on our planet could increase or decrease its angle. With a decreasing angle, the land areas on the Northern hemisphere would receive more sunlight, and thus become warmer. These astronomical effects are well accounted for and are called the Milankovich cycles. |  Interactive tutorial on the Milankovich cycles  |  Sir David Attenborough: The Truth About Climate Change

So if you hear that the climate on Mars has slightly warmed without much human activity there,  that might be true. At the same time Saturn has cooled. This has nothing to do with our situation on Earth. This is simply Milankovich cycles on other planets.

Super-volcanoes have also impacted on climate by throwing millions of tonnes of particles – aerosols – very high up in the air, above the tropopause. When aerosols, in particular sulphate aerosols remain for years in the stratosphere, they can have a strong cooling effect.

If this “volcanic cooling” remain for years, our planet could enter a new ice age because of “negative feedback mechanisms”. With colder temperatures, there would be more ice in the polar areas, and the snow cover would expand and remain for a longer time before melting in spring. More white ice and snow would increase the effect of albedo – the reflection of sunrays back into space. With time, a colder ocean would absorb more greenhouse gases from the atmosphere. With less greenhouse gases in the air, global average temperatures would fall. After some hundreds of years, a new glacial period would have been started. Vice versa, if solar activity rises, the same feedback mechanisms would cause a global warming and after some hundreds of years, establish a warm period. See graphic presentation of the climate variations the last 400 000 years

Climate change always depends on the interaction between three main factors: Solar activity – insolation; albedo and the greenhouse gases in the atmosphere. 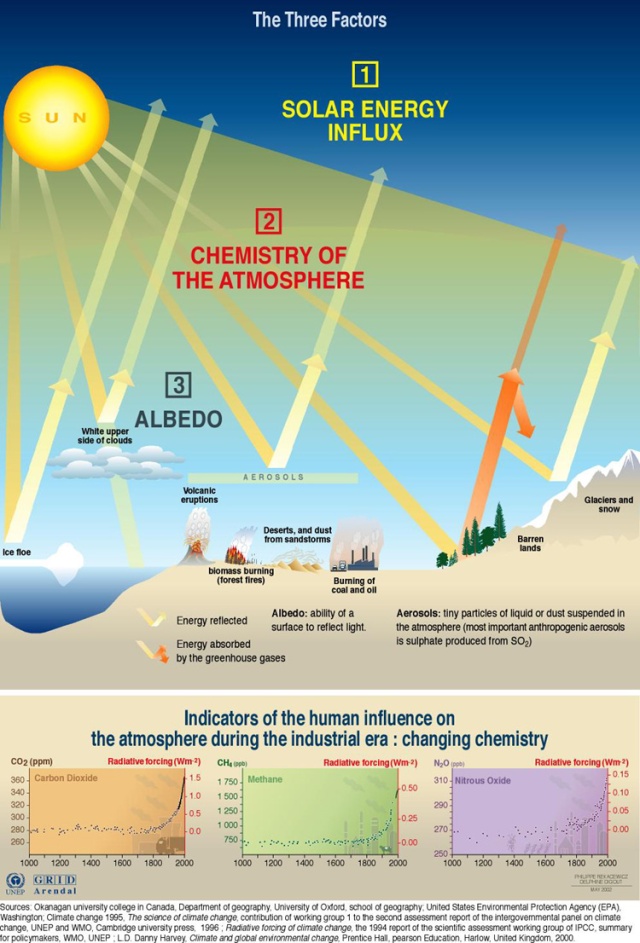 The only factor that has changed significantly the last 100 years is the atmospheric chemistry. There are three main factors directly influencing the energy balance of our planet:

The earth system is continually changing. Temperatures on our planet has changed much and quickly before. These changes can be regional: a temperature increase in the northern hemisphere can have a corresponding lower temperature in the southern part of the world. The global temperature may vary due to solar activity, like the temperature rise during the first part of last century. The rapid temperature rise during the last decades cannot be explained by increased solar activity. The only factor of the three mentioned above where we have clear evidence of change is the atmospheric chemical composition. During the last 200 years, the amount of CO2 in the atmosphere has increased by more than 30%, atmospheric methane has increased by more than 150% while atmospheric N2O has increased by 17% and tropospheric ozone by 35%.”For the last half of the century the positive forcing due to well-mixed greenhouse gases has increased rapidly over the last four decades, while in contrast the sum of natural forcings has been negative over the past two and possibly even four decades” (IPCC: Climate Change 2001- Synthesis report). 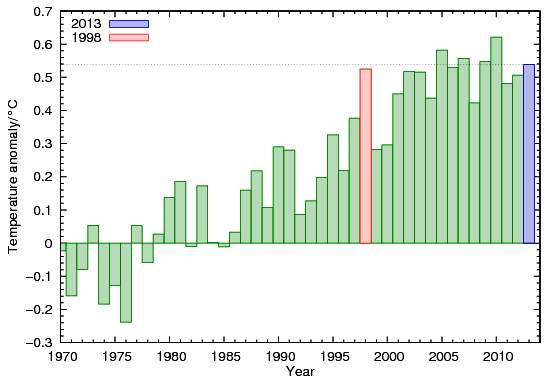 Source: Cowtan and Way
Annual temperature variations are variations in weather. Climate is average parameters over 30 years. Focusing on one year is unscientific cherry-picking. 1998 clearly deviates from the normal trend because of the strong El Nino and unusual solar activity that year.  Cherry-picking the extreme and pretending it is the normal is  dishonest. The last three decades have seen a clear warming trend, despite low solar activity.

In the heated global warming and climate change debate we often hear about the warm period 5000-8000 years ago, the holocen optimum period. That warming was most likely due to the Milankovich effect with a decreased angle on the polar axis and a change in the Earth’s orbit. It seems the summers were warmer than usual, not the winters. There was no warming in the Southern hemisphere. In other words: no global warming took place at that time, and the holocen optimum cannot be compared to our current situation: different time, different causes, different and regional impact. See “The mid holocen “warm period” .

Natural variations give no consolation in current situation
Even if it were true that the current climate changes only were due to natural variations, the problems remain:

Most countries currently depend on oil, gas and coal as energy sources. More than 80% of the world’s energy is obtained from fossil fuels. The reasons are high energy density, abundance and until now relatively low costs.  The problems can be divided in four categories:

1. Environmental pollution.
Coal and oil contain many different chemicals and particles that may be hazardous to health, such as carbon particles, NOx, VOCs; and harm the environment, such as sulphur
Worldwide Air Pollution Deaths Per Year Number Over 2 Million  |  Smog in Asia  |

2. The resources are limited
Fossil fuels are finite. Sooner or later the resources will run out. We use the cheap and easily available sources first. We get “hooked” and addicted. When the source peaks, more expensive and less readily available sources will be exploited – and the products sold to a much higher retail price. The longer we procrastinate with getting rid of our fossil fuel addiction and rehabilitate ourselves by energy efficiency, renewable energy sources and sustainable development, the higher the costs and the more painful rehabilitation.
Think “peak oil” is a discredited idea? Think again

3. Uneven geographical distribution
The big reserves of cheap, conventional crude oil are concentrated in less democratic regimes in the Middle East, controlled by persons with agendas of their own. The political costs of pouring rivers of petro-dollars into these regimes are already outrageous.
Climate change in facts and figures .

The global annual emissions of carbon dioxide are estimated to be more than 35 billion tonnes and increasing. With business as usual, global emissions are estimated to be over 50 billion tonnes 15 years from now. Some of this is absorbed by soil and vegetation. Much is absorbed by the oceans, causing serious acidification. Some of it remains in the atmosphere for decades or centuries, leading to accumulation of CO2 in the air. See the Keeling curve at Mauna Loa and
Global carbon emissions set to reach record 36 billion tonnes in 2013 (Tyndall centre)

What happens now, is no climate variation, it is a real climate change.  The solar forcing – the insolation – has not increased the last forty years. There is no special warming Milankovich effect like we had in the Holocen optimum some 5000-8000 years ago; there are no big non-eruptive volcanoes pumping greenhouse gases into the air. There is no other explanation for the present global warming than human activity. We can already observe how the Earth’s climate and with it the world’s ecosystems are changing at an accelerating pace.

The changes will most likely happen in steps and leaps and uneven geographically, as it has done previously. Strong La Ninas in the Pacific will give cooler periods, El Ninos warmer periods. The North Atlantic Oscillation (NAO) will keep on having varying impact on the weather in the North East Atlantic area. A thicker “Asian brown haze” will reduce global warming for some time, less air pollution will enhance it. The solar insolation will also vary in cycles. But these variations are changes in weather. Climate change is change in average weather over 30 years or more. Many mix weather and climate, thinking that if the winter of 1934 in the Mid West was warm, christmas in Southern California 1968 was snowy and cold while 1972 in Oslo and New York was without snow, the present rainy christmas is also just a natural climate variation. But it isn’t. The weather in 1934, 1968, 1972 and 1998 is just that: weather. Not climate. See easy to understand animation: take the dog for a walk! 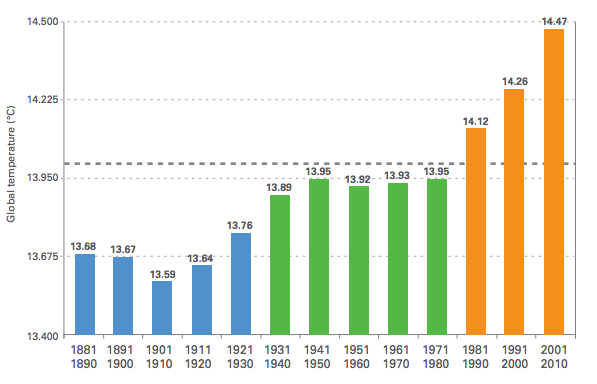 When measuring the average temperature over decades, there is a clear and dramatic warming the last 30 years.
Global warming the last three decades has been dramatic. Source: World Meteorological Organisation, 2013 http://library.wmo.int/pmb_ged/wmo_1119_en.pdf

As long as the temperature  increase is due to the extra anthropogenic greenhouse gases only, the change will be fairly slow and predictable. When the big, natural feedback mechanisms are activated, the changes might take place rapidly. The long-term trend is clear – the average global temperature is currently rising on average by 0,16°C per decade.  The changes are irreversible from a human perspective. The world as we knew it, is gone. We can only make more or less educated guesses at how the new world will look like, and adapt to it as best we can. 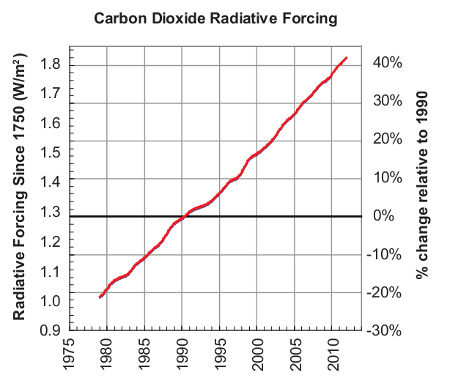 American-Arab oil interests (“big oil”) in collaboration with “big tobacco” have built up a massive propaganda and lobbying industry in the United States. It is  the biggest and richest propaganda machine that the world has ever seen. They produce a flood of disinformation and confusing and meaningless petitions which alleged scientists may sign. If these “scientists” at all exist or are aware that they are on the list, they have one thing in common: they are not climate scientists in the sense that they publish research results in peer-reviewed scientific journals. They equally willingly sign claims that the earth is less than 7,000 years old, that creationism is a scientific theory, that  the safety of the community increases with the number of machine guns in private ownership and that the oil continuously is renewed in the Earth’s core, pressed up towards the crust of the earth and fills up downed oil wells.

They claim to be scientists, but you know their message weeks before they publish it by reading the Heartland inst website. These “scientists” simply jump when the multibillionaire CEOs of the world’s largest oil companies say “jump!”. Their scientific integrity and credibility is nil. (More on climate change deniers)

Fighting the myths: Cutting through the stew of climate misinformation with facts

Stand by for another DECADE of wet summers, say Met Office meteorologists

What does past climate change tell us about global warming?

Why did climate cool in the mid 20th century?

Climate change in facts and figures